“It’s kind of surreal,” she said on the red carpet. “I can’t put into words what this means. To think of where this journey began, to want to go to the Olympics one day and now be inducted into the Hall of Fame, it’s surreal.

Kwan, who turns 42 on July 7, was a 13-year-old substitute on the 1994 Olympic squad and traveled to Lillehammer. She won the silver medal at the Nagano Olympics in 1998, then bronze in Salt Lake City in 2002. She was selected for the 2006 Olympic team, but after being injured during training at Turin, she handed over her post to alternate Emily Hughes. In total. she won nine US championships and five world championships in the late 1990s and early 2000s, making her the most decorated figure skater in US history. 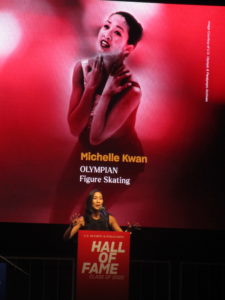 On stage for her induction, Kwan spoke of the special commitment of her parents, who emigrated from Hong Kong and invested countless sacrifices in skating for her and her sister, Karen, who was also in attendance.

“I remember I was five years old and I could barely lace up my skates,” she said, “going on the ice without even knowing how to skate and having the most fun. Of course, there is a lot of work. My parents, I was seven years old when I made this statement that I wanted to go to the Olympics. They were like, ‘That’s a lot of hard work.’ They didn’t laugh.

Kwan is the first figure skater to be inducted into the U.S. Paralympic Olympic Committee Hall of Fame since 2008, when Brian Boitano, Carol Heiss and coach Carlo Fassi were inducted. Dorothy Hamill, Scott Hamilton, Tenley Albright, Dick Button, Kristi Yamaguchi and Peggy Fleming are the others on the very exclusive list. No pair or ice dance team has been elected yet. Hamill, who won the gold medal at Innsbruck in 1976, was on stage for most of the evening presenting the Hall of Fame trophies to the winners as they took to the podium.

Other inductees in the 14-member class were swimmers Michael Phelps and Natalie Coughlin, soccer player Mia Hamm and Lindsey Vonn, who won 82 Alpine Skiing World Cup races and gold in the downhill at the Vancouver Olympics in 2010.

“I know Michelle, she’s such an amazing person, and she’s done amazing things,” Vonn said before the ceremony. “She’s an incredibly smart and inspiring person in so many ways. I remember watching her because she was successful before me, and I’ve always loved watching amazing female athletes because it inspires me. to do more.

Kwan has had a busy year. In January, she was officially named United States Ambassador to Belize. His nomination is currently pending before the US Senate. Also in January, Kwan gave birth to her daughter, Kalista Belle. Being a mom gives her another insight into her platform.

“I remember when a young mum came to me when I was 13,” Kwan recalls. “’I have a girl who wants to be like you, she’s skating in the living room.’ At the time, I didn’t understand, but I thought it was a very big responsibility to be a role model for young people. I understand responsibility.