FINALLY: After two years of finishing second, Aaron Kaminski receives the first prize after scoring a 38 to win the â€œCan You Beat Biggy? Â»Thanksgiving Classic at the Sand Trap on November 27th. (Photos by David Biggy)

â€œNo one beats me for two years in a tournament and gets away with it,â€ he said, almost seriously. “I came here today to try to get first place for the kid who won the last two years.”

Unfortunately for “Holey Moley” Season 2 contestant and president of the O-Street Golf Association – he still stings a bit of his shortfall all of a sudden in “Can You Beat Biggy?” from last year? Thanksgiving Classic – Sal Caporale Jr., now a freshman at Villanova University, didn’t hit the sand trap this time around.

â€œLast year Sal put his 39 with one lap, and I couldn’t break the 40, even playing five laps,â€ Kaminski recalled, moments after being crowned this year’s champion with a weak lap 38. “So today I had my best lap on this course, and I was hoping Sal would be there to defend his title. But he didn’t show up. I’m disappointed, and this win for me tastes a little sour because I couldn’t beat Sal.

“El Presidente”, who played the tournament host to establish the challenge score – he didn’t shoot his lowest lap until later in the day, when he played alongside fellow professional minigolf Bill Mezier III – however beat Biggy. In fact, he was the only one, because I registered a 42.

â€œIt’s the icing on the cake,â€ Kaminski said with a smile. â€œBut let’s be realistic. It’s really the “Can you beat Sal?” “Tournament.” 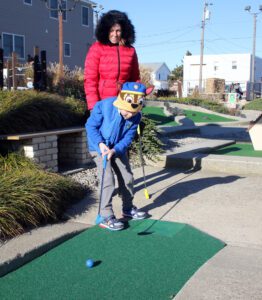 WHACK IT: Young left-hander Conor Kelly takes the tee on the third hole of The Sand Trap under Gina Kelly’s gaze during “Can You Beat Biggy?” Â»Thanksgiving Classic November 27. Conor placed third in boys 12 and under.

Interestingly, Kaminski took this straight from a quote from Sal after last year’s tournament. What does it say? If you can’t beat him, join him? Nonetheless, officially behind the chairman in second place was Rob Meyer, who rolled a 45 and edged out Mezier as a tiebreaker.

Of course, the biggest winner of the day was the Hunger Foundation of Southern Ocean, for which we raised $ 12,330.

â€œIt’s a great tournament and it has tons of great sponsors,â€ Kaminski said. â€œIt’s always a victory for everyone, when they come to play here and raise money for the Hunger Foundation. It’s always fun to be a part of that.

In the 12 and under divisions, the girls’ champion was Caterina Stablini, 9, who clocked a flamboyant nine to finish with a 67, edging her 10-year-old sister, Gia, also in a tiebreaker. . On the boys’ side, this year’s champion was 12-year-old Alex Davlouros, who shot a solid 49 to finish ahead of Benjamin Russo (64) and Conor Kelly (74), 5.

â€œI was excited to play,â€ said Benjamin, who first met me as I prepared for the Summer’s End tournament in September and his parents, Rebecca and Vincent, immediately put the Thanksgiving Classic on the calendar. â€œI didn’t think I could beat you. I haven’t played for a while. I could have done better. It’s really not my class, but there is always next time. 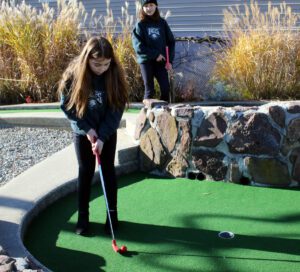 SINKIN ‘IT: Caterina Stablini hits her third putt on the 12th green of the Sand Trap during the â€œCan You Beat Biggy? Thanksgiving Classic November 27. Caterina won the Girls 12 and Under title.

Unfortunately, the turnout was much lower than last year’s tournament. Still, a group of new people showed up to star in the Classic, which included a group that had attended Thanks4Giving 5K earlier today, another Hunger Foundation event.

â€œWe wanted to support the cause and see your green jacket,â€ said Linda Cornog, who played alongside Rob and Chuck Meyer, as well as Libby Meyer and her boyfriend, Josh. â€œWe were told you would be here, so I came here to try and beat you, which I didn’t. It is a demanding journey. “

Without a doubt, without the difficult course of owner Larry Leff, very well prepared by John Schroeder and his crew, the Thanksgiving Classic probably wouldn’t even be a thing, so props for them. Special thanks again to Don Myers, who secured the most incredible sponsors for this year’s tournament, as well as the Southern Regional Interact Club, who sent 22 volunteers to help register participants and serve as official scorers.